The 3Energy company group reached the 2nd place at the Saxon Environmental Awards 2017.

Großschirma. Last Saturday, the prizewinners were awarded the Saxon Environmental Award 2017 by the minister of the environment Thomas Schmidt at Schloss Albrechtsberg (Albrechtsberg Palace) in Dresden.

A seven-member jury of representatives from science, economy, associations, management and media selected seven prizewinners in total from about 60 applications beforehand, who were honored at the function for their excellent performance in environmental and nature protection.

Our company group was part of the nominees in the category „environment-friendly products“. We even reached the 2nd place with our “conceptual model series for a self-sufficient energy supply by renewable energy”. We are very proud to have come this far and are happy about this success.

During his one-week trip to Germany, the deputy minister for economic development, science and technology from Rio Grande do Sul/Brazil also visited the 3Energy group in Großschirma

Großschirma. In order to deepen the existing economic relations between Germany and Brazil as well as the development of new trade and cooperation structures in the field of renewable energies, the deputy minister for economic development, science and technology, Mr. Evandro Fontana, accompanied by his assistant Ms. Astrid Schünemann, undertook a one-week journey from 6th September to 13th September 2017 through the federal republic.
One of the objectives of his trip was also the signing of trade agreements in the sectors logistics, engineering and software development as well as the presentation of the German-Brazilian Business Forum, which takes place on 12th November to 14th November in Porto Alegre/Brazil.

After a tour of our premises and promising discussions with potential cooperation partners in the field of solar module production (Heckert Solar, Chemnitz) and storage technology (ads-tec, Dresden) in the presence of our Brazilian subsidiary EPI Energia e Investimentos Ltda., Mr. Fontana and his assistant visited one of our wind turbines nearby in Zug/Langenrinne. 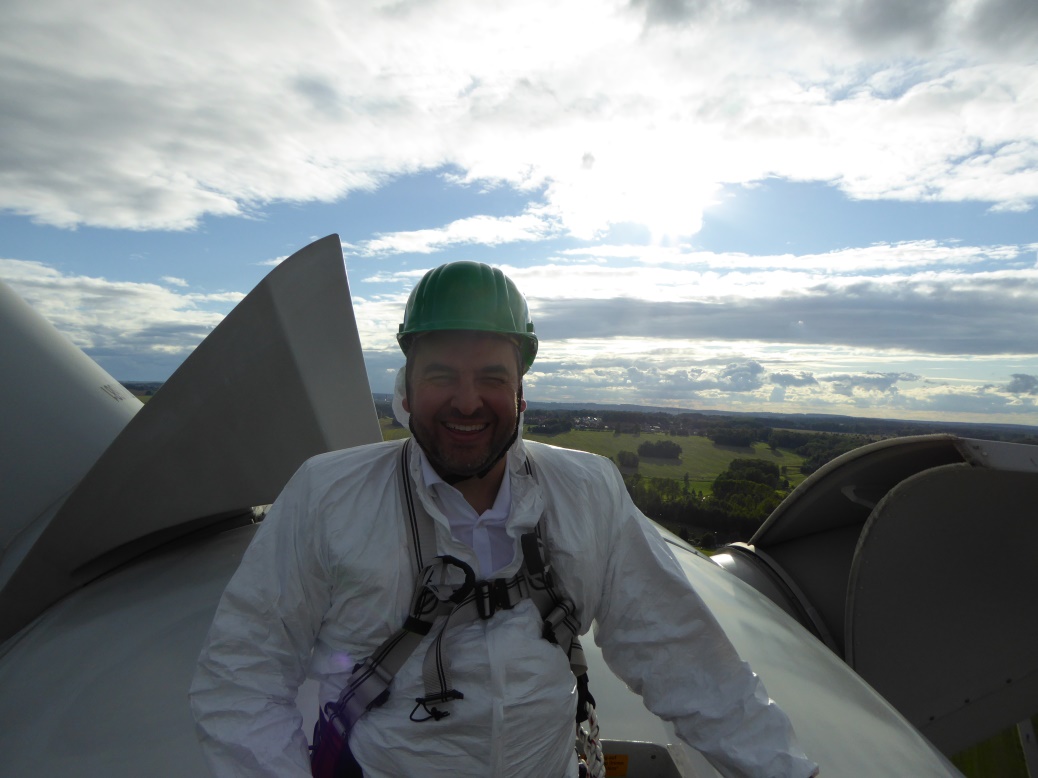 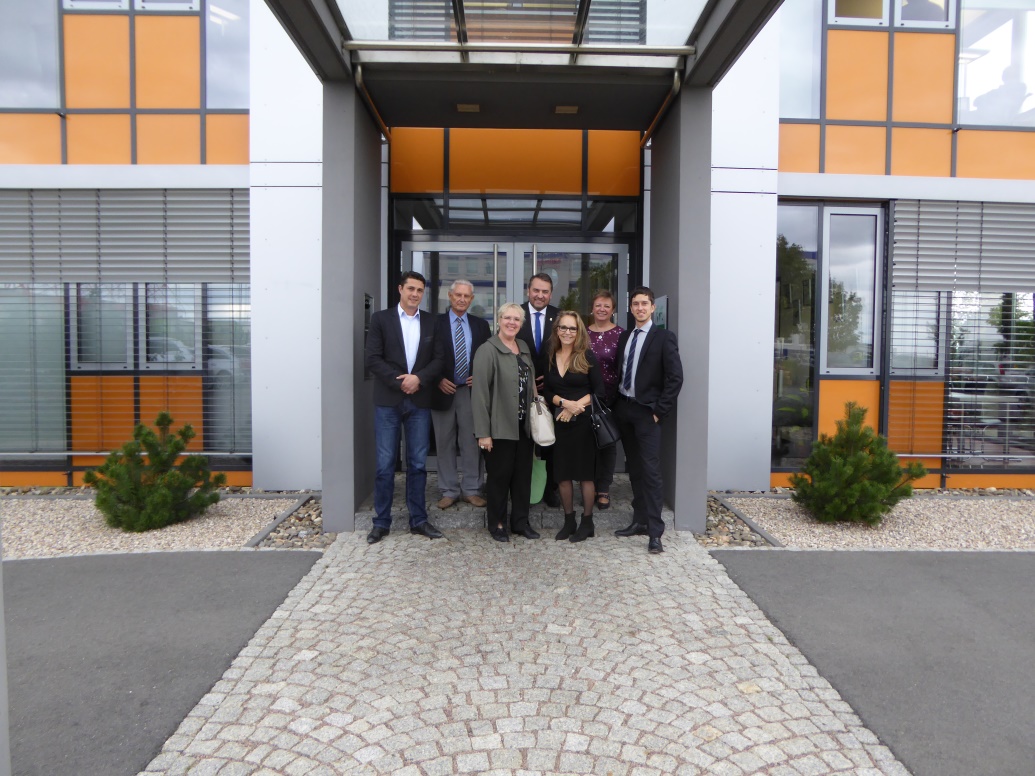 Evandro Fontana (center in the back row) and his assistant Ms. Astrid Schünemann (front left) as well as representatives of eab New Energy GmbH and EPI Energia e Investimentos Ltda.

Through the work of EPI, eab New Energy GmbH, part of 3Energy group, supports the federal state Rio Grande do Sul with its desired expansion of the usage of renewable energies, in this case the realization of both wind energy and photovoltaic projects. With the visit of Mr. Fontana, the long-term existing relations to the federal state were not only deepened but also new cooperation fields with successful medium-sized Saxon companies were determined. Joint future projects strengthen the value of the complete middle-Saxon region.

The next meeting was agreed upon for the German-Brazilian Business Forum from 12th November to 14th November in Porto Alegre.

The first of two photovoltaic projects in the department Salto in Northwest Uruguay has successfully been commissioned.

Together with the cooperation partner SEG INGENERIA S.A., eab New Energy GmbH took part in a government tender of the Uruguayan grid operator UTE (Administración Nacional de Usinas y Trasmisiones Eléctricas) with two projects for the signing of a power purchase agreement for photovoltaic ground-based plants in May 2013. 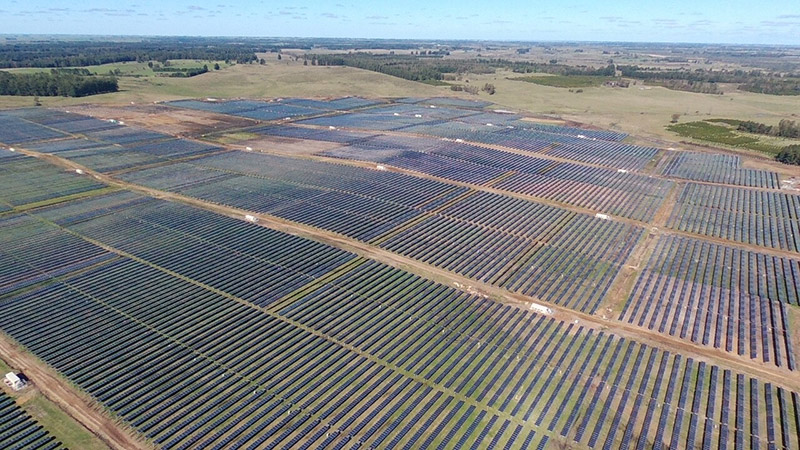 The projects Del Litoral with 17.03 MWp and El Naranjal with 57.46 MWp and a total area of about 210 soccer pitches were successfully developed in the 2 following years and sold to a major investor in October 2015.

The official commissioning for the project Del Litoral took place at the end of July. The construction phase for the larger project El Naranjal will be finished at the end of August/beginning of September.

Energy Solutions – Made in Germany

eab New Energy GmbH supported the knowledge transfer in the field of solar energy use within the “German Solar Training Week” (GSTW) from 10th July to 13th July 2017 in Myanmar, organized by GIZ (German Society for International Corporation) and financed by the Federal Ministry for Economic Affairs and Energy

It is the objective of the GSTW to carry expert knowledge about the application in the field of photovoltaic and self-sufficient energy supply systems up to the project planning of renewable energy projects into potential markets in order to replace traditional power generation units like coal-fired power plants and diesel generators with renewables and stabilize volatile power grids by adding generator capacity.

Many trainers from renowned German companies shared their knowledge in the course of the training week to overcome prejudices and to give an up-to-date overview of renewable energy technology. Among these companies, eab New Energy GmbH held two training sessions with the focal points “Installation of self-sufficient clusters for off-grid and back-up applications” as well as “Provision of control energy in isolated networks with mainly renewable generator capacities”. 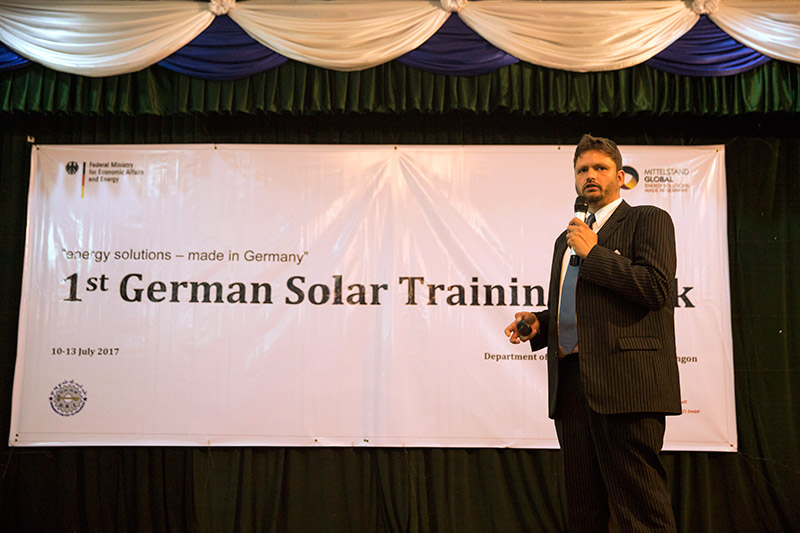 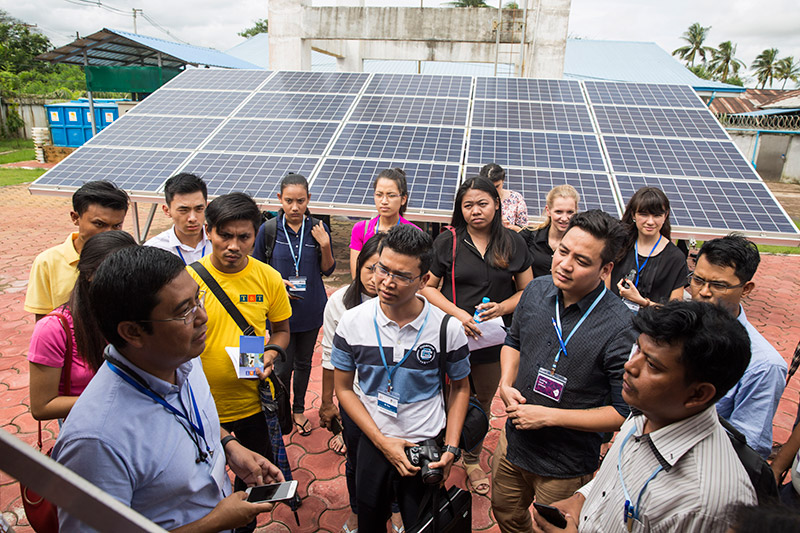 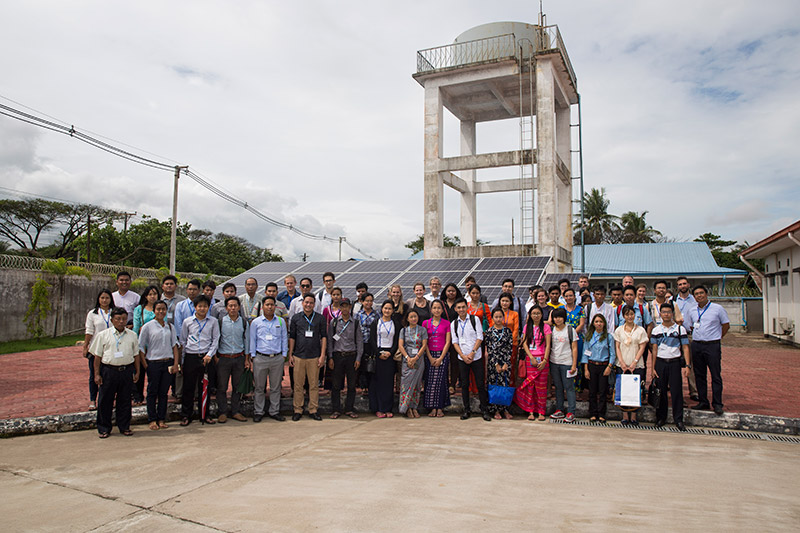 Myanmar is a country which shows a high potential for solar energy use. In contrast of this stands one of the lowest electricity rates in the South East Asia, a poor distribution network infrastructure and, in peak periods, too low power plant capacities. Diesel generators as back-up aggregates and main supply units are part of the typical picture in cities as well as in the rural area of Myanmar.

Therefore, Myanmar is one of potential markets in which renewables can be included sustainably in the development of the energy supply infrastructure in order to develop a stable energy supply and thus raise the living standard of the population. For our 3Energy group, an early positioning in this market environment offers a long-term market penetration.

Within her summer tour, Ms. Dr. Jana Pinka, delegate of the parliamentary group Die Linke (The Left) in the Saxon State Parliament, visited us last Friday, 7th July 2017, in Großschirma.

After a tour of the company premises including a viewing of our container for decentralized energy supply, we visited, in the presence of Ms. Dagmar Berek, board of Stadtwerke Freiberg and our Heliotec Betriebs- und Verwaltungsgesellschaft mbH, one of our wind turbines in Langenrinne/Zug near Freiberg, which we operate together with Stadtwerke Freiberg.

We thank Ms. Dr. Pinka for the pleasant visit and the informative discussions and wish her a continued nice summer tour with lots of exciting impressions and interesting conversations.
To the article of the newspaper Freie Presse 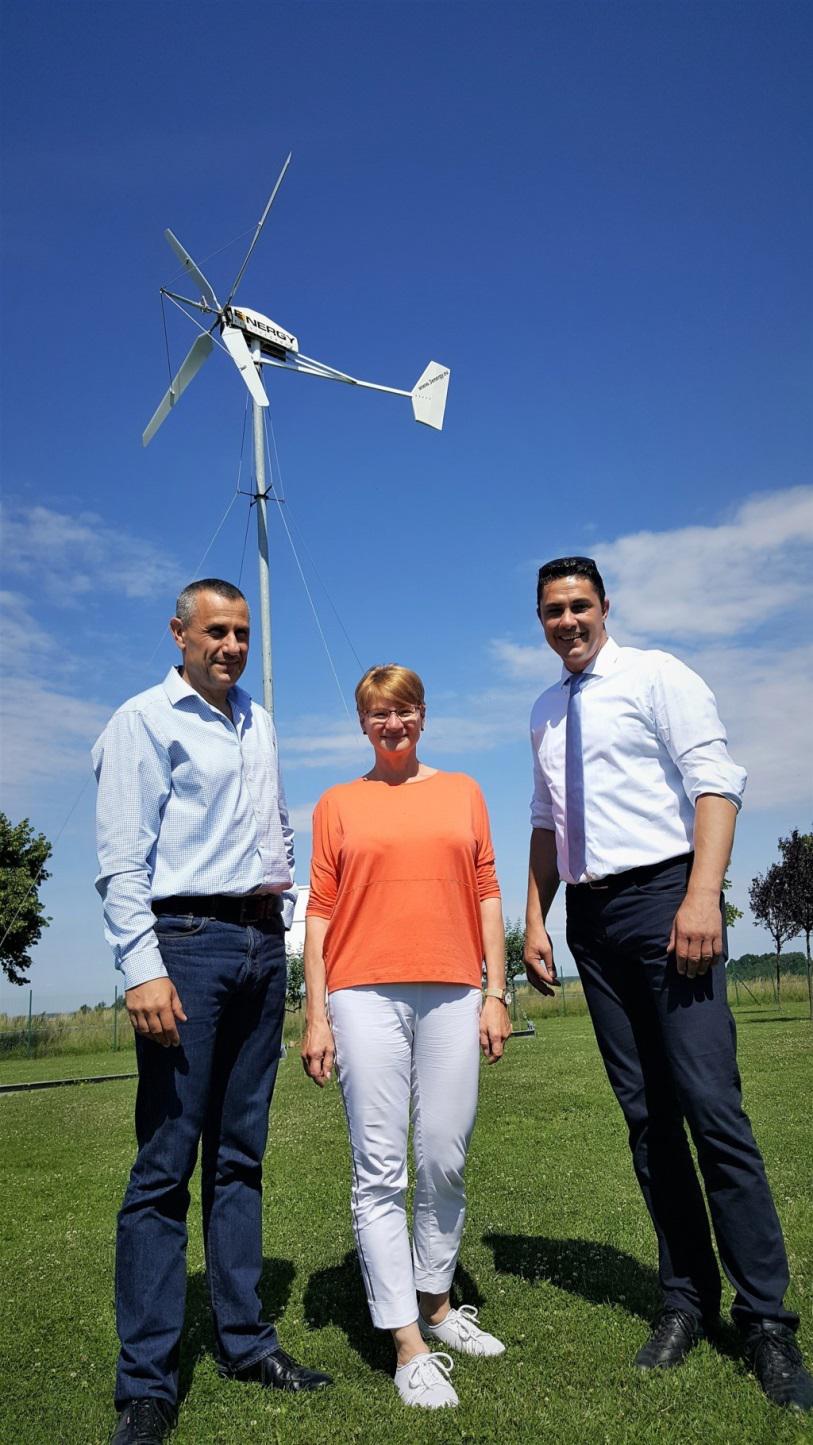 On Monday, 8th May 2017, one more orangeCHANGE charging station was put into operation

We inaugurated the first charging station in the region with a payment system at the parking lot of Deutsches Brennstoffinstitut (DBI) in the presence of Central Saxony’s county commissioner Matthias Damm (CDU) and Freiberg’s mayor Sven Krüger (SPD) as well as the CEO of Stadtwerke Freiberg, Axel Schneegans. 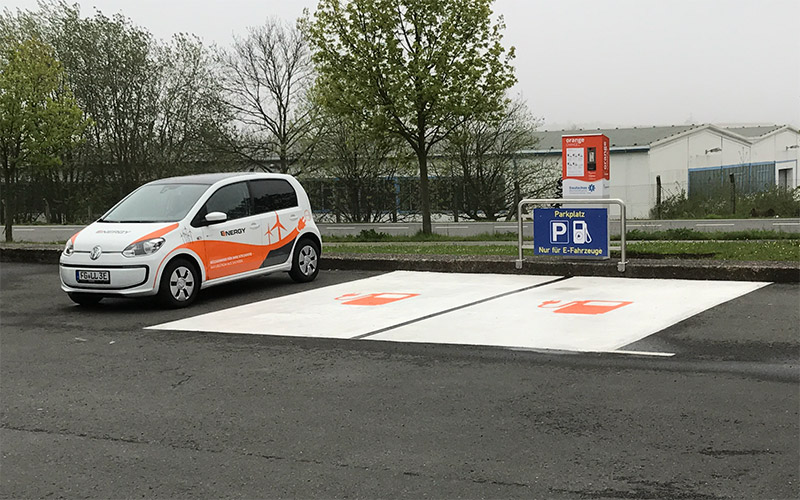 On site, the charging is now possible for all electric vehicles of customers and guests of the DBI. Mr. Erich Fritz, CEO of Deutsches Brennstoffinstitut Vermögensgesellschaft, has responded to the wishes of his visitors. Guests and employees have expressed their wishes in the past again and again for a loading facility on site.

Payment can be easily and conveniently made through 10 cents, 20 cents, 50 cents or 1 euro coins as well as tokens which can be bought at the entrance of the DBI premises. Solely the first charging process only starts by reaching the equivalent of 1 euro.

We actively support the expansion process of loading facilities. Already in March 2017, we were able to deliver a system for wall installation to the car dealer Franke on Dresdner Straße in Freiberg.

Our orangeCHANGE charging stations offer individual solutions for every customer and every field of application and are characterized by easy handling using a coin payment system which can immediately be accessed by every user without registration on online portals as well as the integration into the existing parking area monitoring.

eab New Energy with own exhibition stand at the IES 2017

eab New Energy GmbH took part again at the „9th Iran International Renewable Energy, Lightning & Energy Saving Exhibition“ from the 24th to 27th February with our own exhibition stand within the German pavilion of the Federal Ministry for Economic Affairs and Energy. We were able to make new contacts as well as deepen the already established contacts at fairs in the last year. 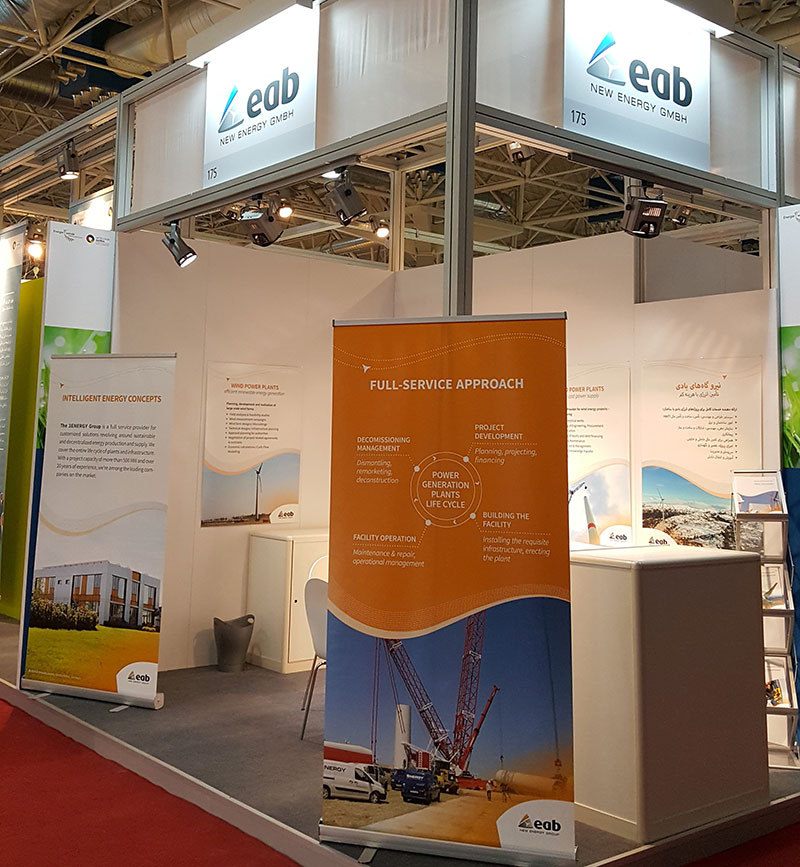 On the 24th February 2017, the wind energy plant of the type E-70  E4 (2.3 MW) of the renowned wind turbine manufacturer Enercon has successfully been put into operation. 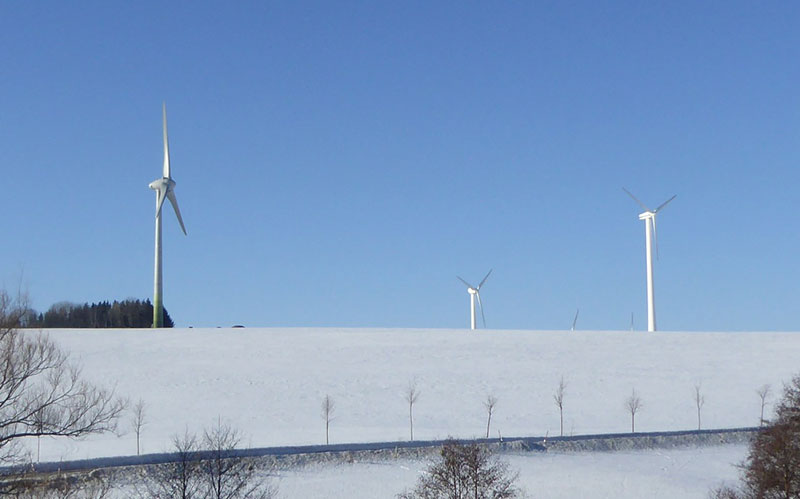 The wind energy plant was erected in the course of a repowering. The new plant has a rated output of 2.3 MW, a hub height of 64m and a rotor diameter of 71m and will annually feed approximately 3,600,000 kWh of electrical energy, 5 times more energy than the old plant, into the medium-voltage grid of the “Mitteldeutsche Netzgesellschaft mbH” (MITNETZ).

On behalf of the agricultural cooperative “Bergland” Clausnitz e.G., eab New Energy GmbH developed the wind energy project and implemented it in cooperation with the general contractor 3E technology GmbH.

Mathematically approximately 1,200 households can be supplied with electricity with this wind energy plant.

How can we help you?
Call us under